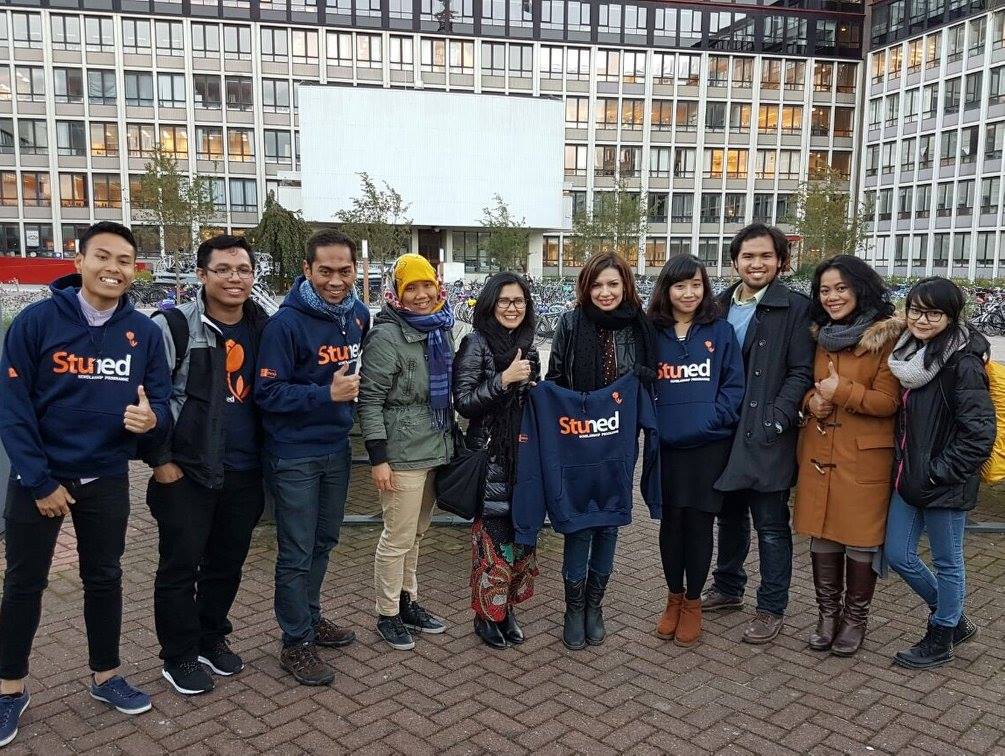 Sesuai janji saya tadi mau menjelaskan apa itu StuNed, ini dia
StuNed, a shorthand of Studeren in Nederland, is a fully funded scholarship for master’s degree, short course, and tailor made training programs sponsored by the Ministry of Foreign Affairs, the Kingdom of the Netherlands. The Nuffic Neso Indonesia along with the Embassy of the Kingdom of the Netherlands in Indonesia will arrange some procedures and administrative documents that applicants should submit completely and punctually. For master’s scholarship program, the selection procedures and due dates for submission would be announced in the late of December or in the beginning of January. My advice is to frequently check the Nuffic Neso’s Website to ensure that you won’t miss the deadline for submitting your applications.
Stuned Scholarship is generally intended to young professionals and fresh graduates who have good academic and organizational records. In some scholarships, the GPA doesn’t mean a thing, but I think, in Stuned, they also put GPA as one of the main considerations to choose whether or not we are credible candidates. Fortunately, young professionals might have more chances than those of fresh graduates.
More importantly, your motivation letter would be the most prominent attribute to market yourself. On the prepared application form, you need to write down your motivation by answering 3 questions with no more than 500 words. My advice is to deeply understand your own intention on studying abroad and why you choose that major, to read again, and to ask your friends to screen and to give feedback on your motivational letter, and you need to be straightforward to your own motivation. I think that other people don’t have rights to change your determination on what you are going to be in the future, they just have rights to support and to give you commentaries intended to rebuff your motivation.
Some documents that you need to prepare are as follows: 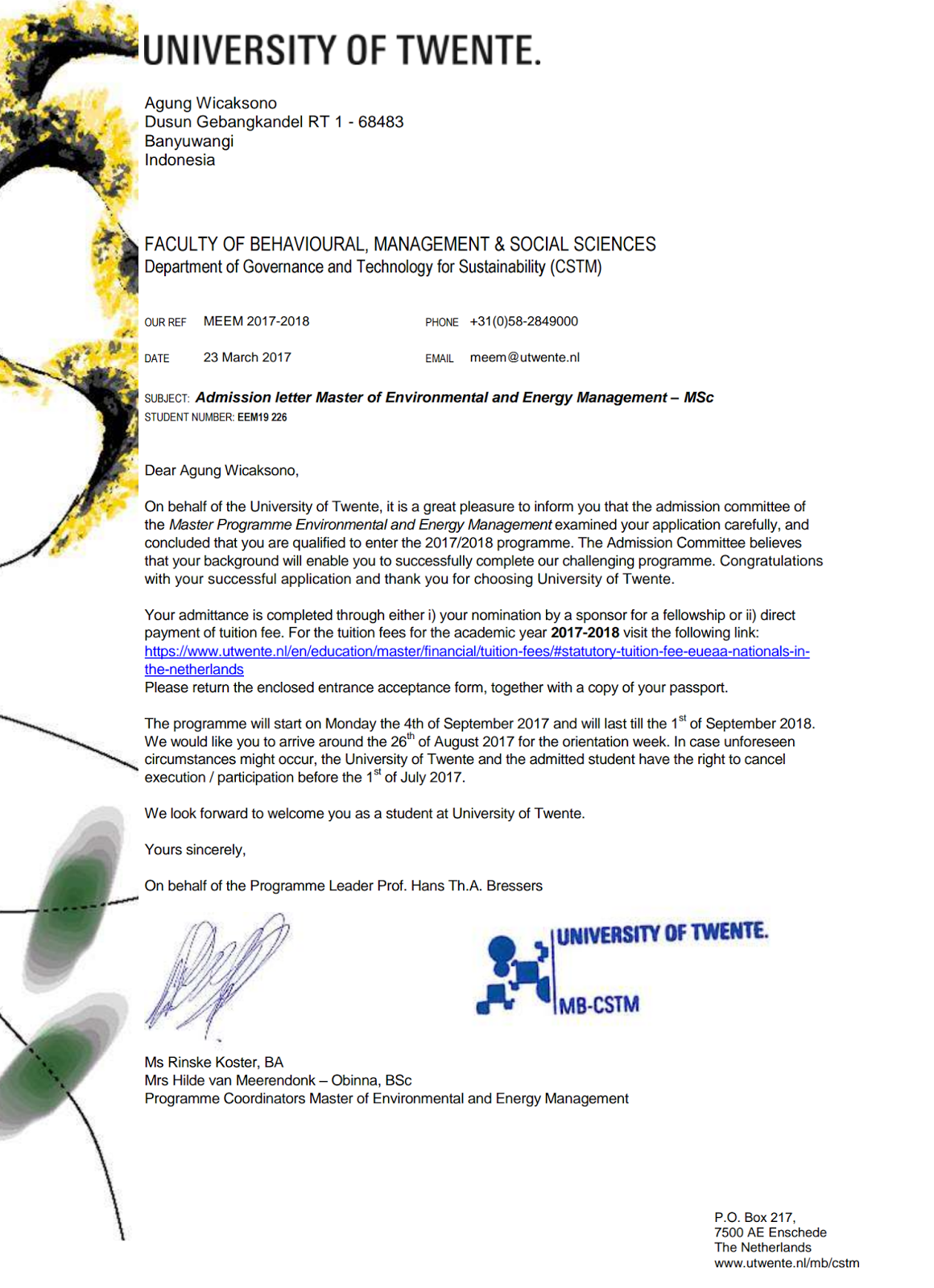 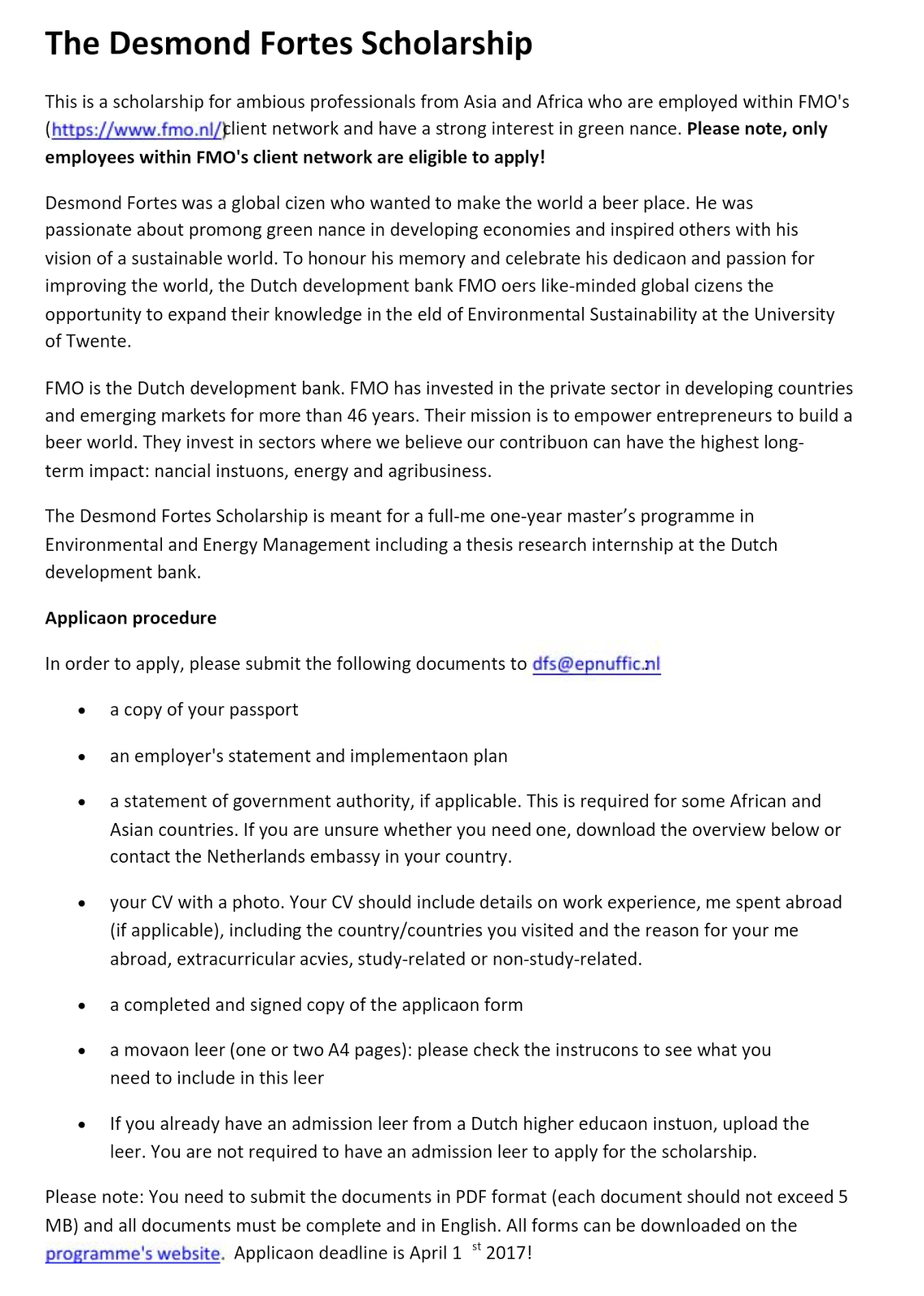 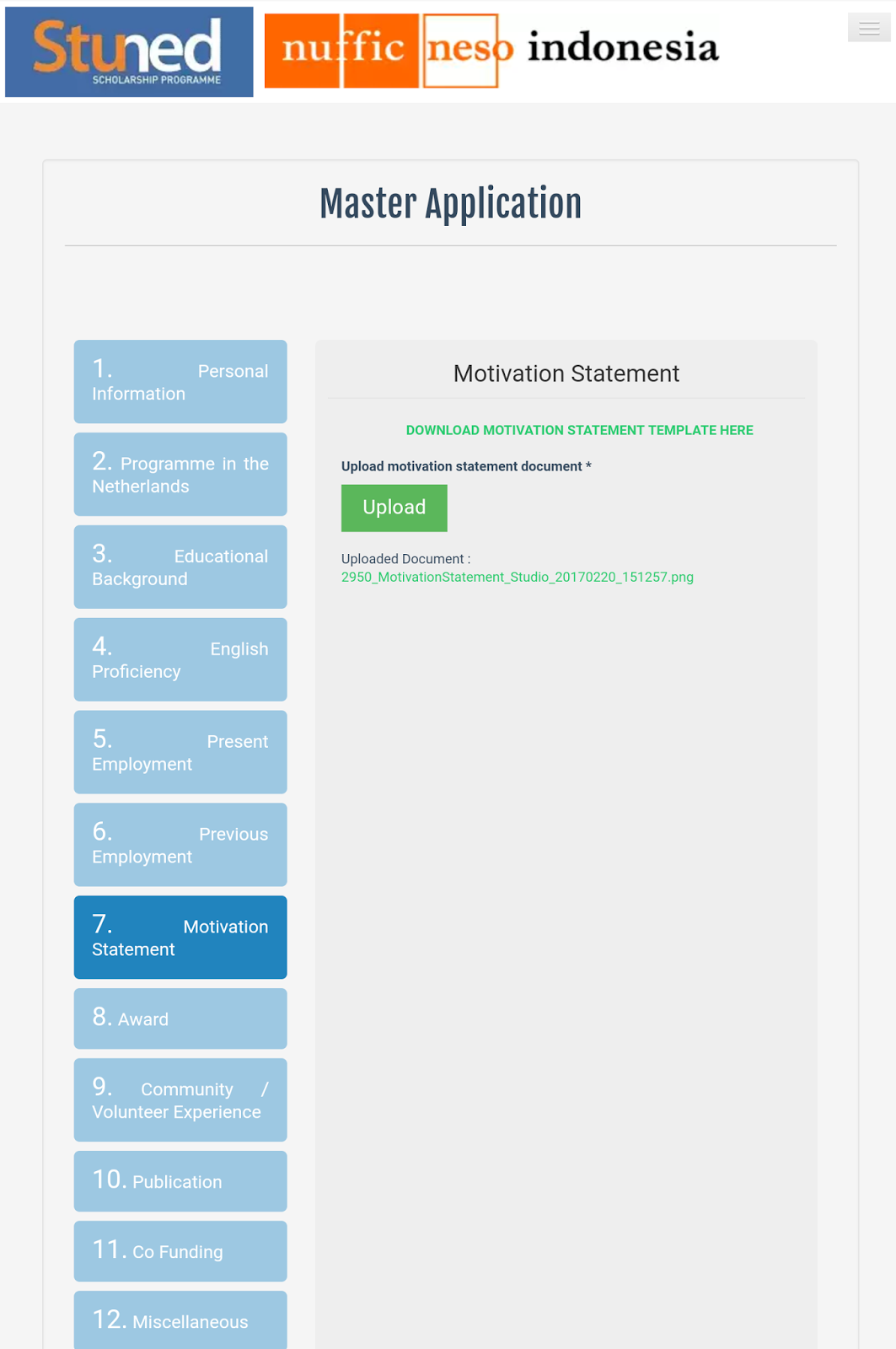 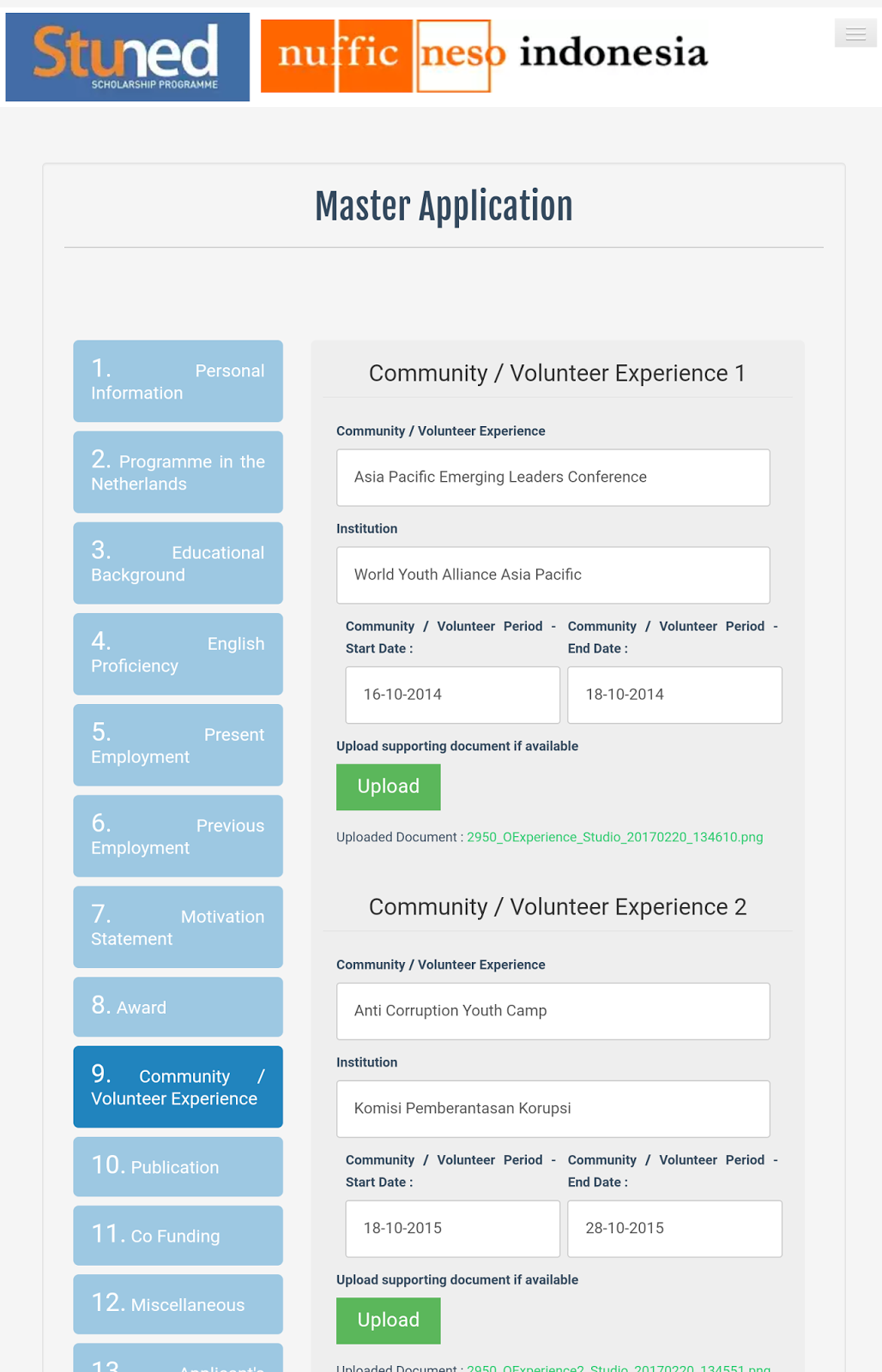 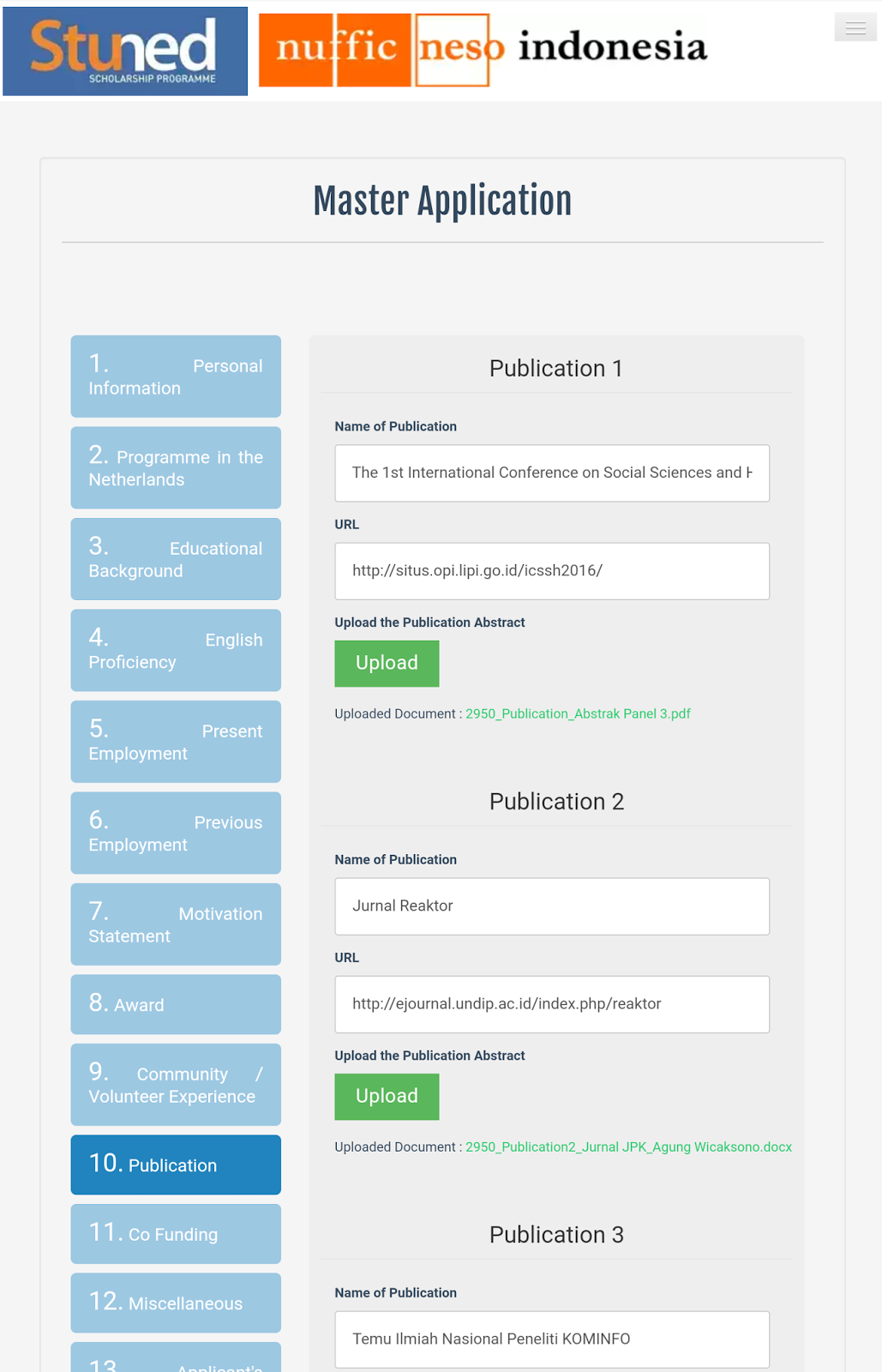 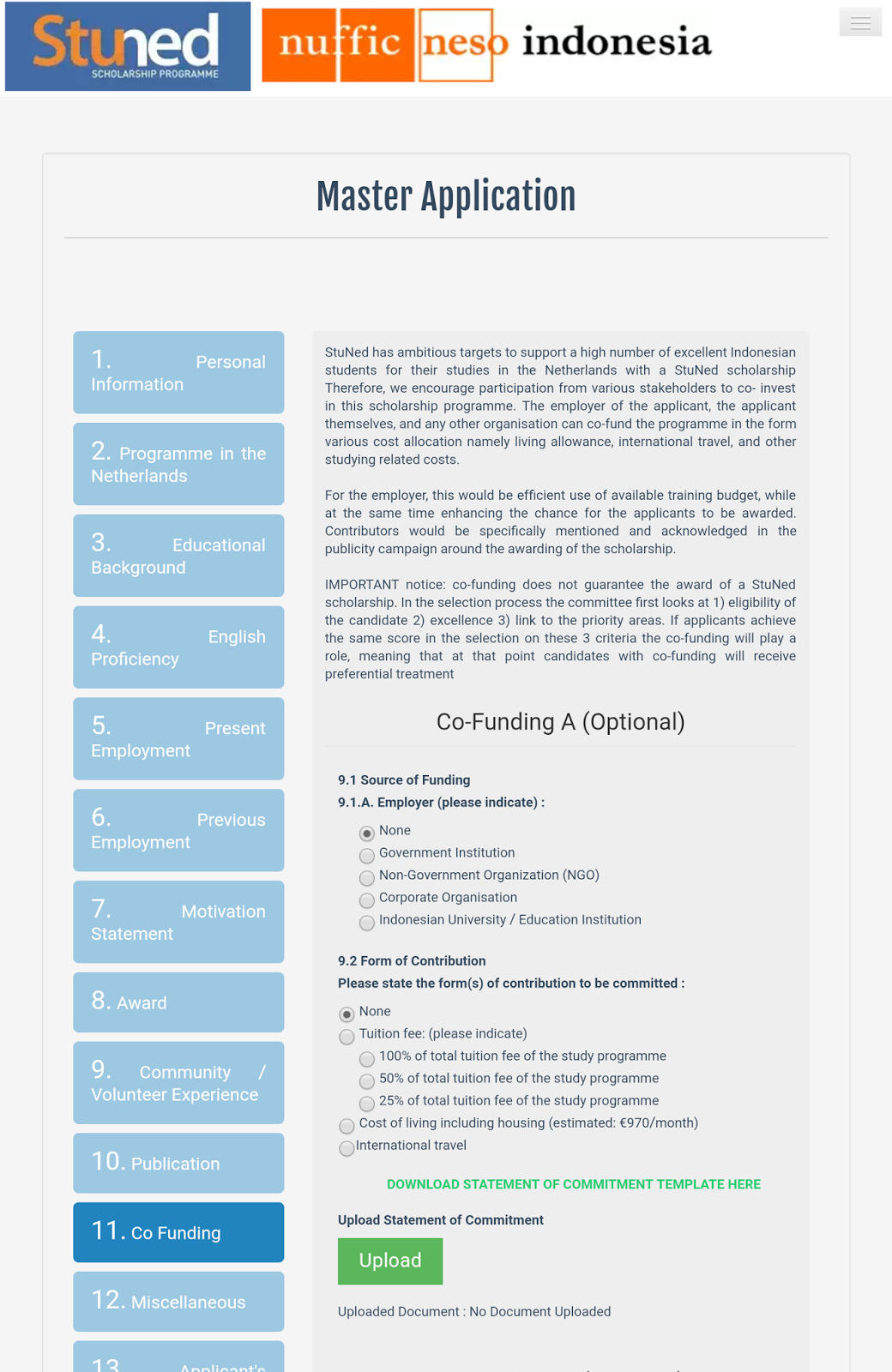 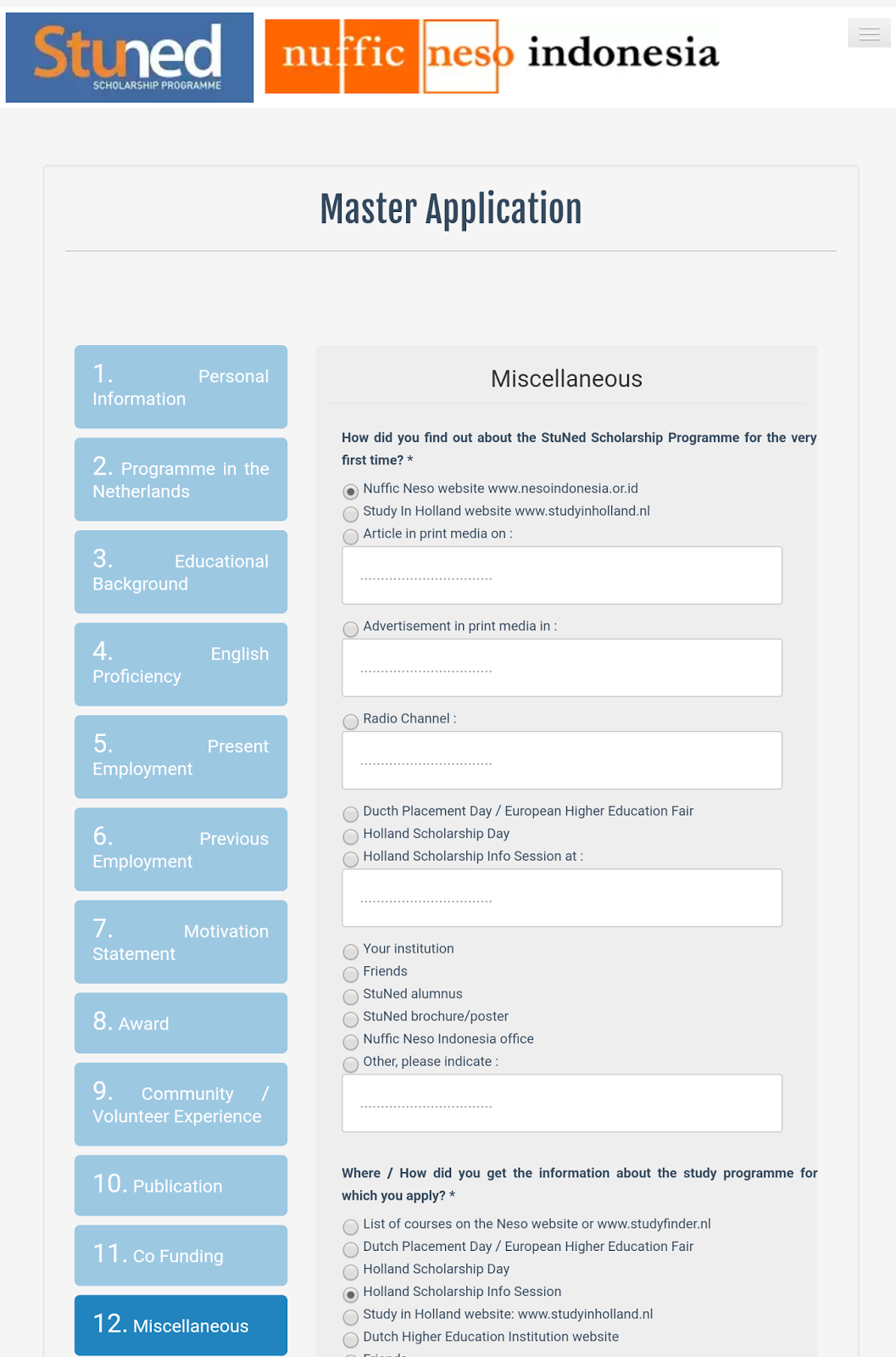 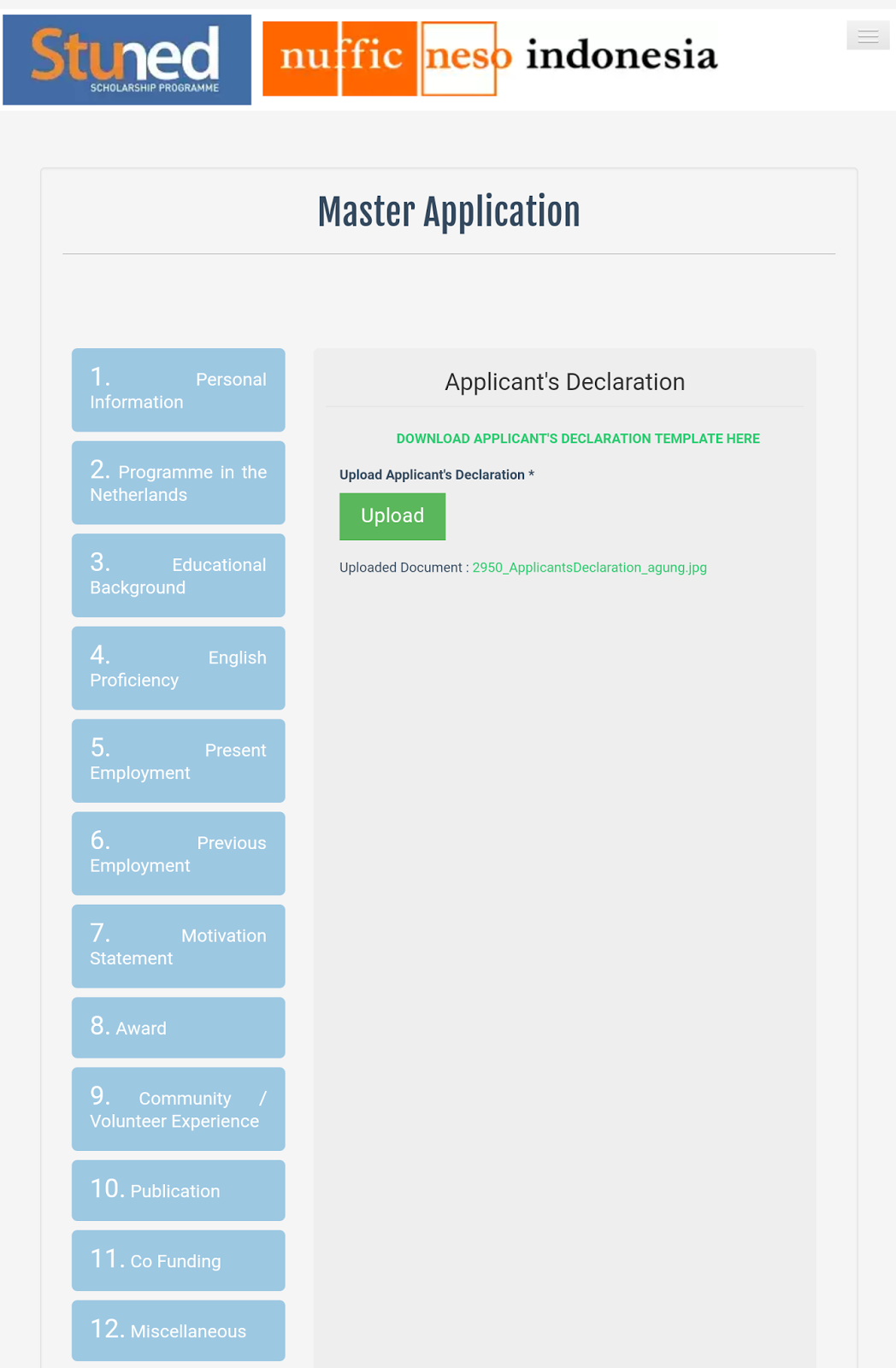 You may add other supporting documents such as a letter of recommendation from your Dean, bachelor’s thesis supervisor, or maybe your office director, a thesis proposal (your prior thesis design projecting what you are going to research on your master’s thesis), certificate of achievements, seminars, workshops, etc.
Furthermore, Stuned Scholarship has also priority areas to intentionally strengthen the bilateral relationship between the Republic of Indonesia and the Kingdom of the Netherlands so the prospective applicants should also give a further attention to attached documents on the Nuffic Neso’s website regarding some priority areas or study fields’ priorities that are required for Stuned Scholarship. In my term, there were six main areas highlighted by the Nuffic Neso which were including Health Management, Transport (Agro)logistic and Infrastructure, Security and Rule of Law,  Water,  Agri-food and Horticulture, and International Trade, Finance, and Economics.
Please bear in mind that they might not circumscribe how many additional documents you can apply as supporting documents to your application, however, you should rethink and select which documents that might be aligned with your major, motivation, and objective to study in the Netherlands. To sum up, no need to attach unnecessary documents.
The selection process at the universities is sometimes more complicated. In the case of the University of Twente, they determine the prerequisite documents for students who are keen on applying. At that time, I needed to complete documents as follows:
You need to submit it via Studielink, an academic platform for all applicants who want to apply at one of the universities in the Netherlands, and no need to pay anything including application fee.
Within 2 weeks, the Admission Office of your selected faculty will notify via e-mail whether you are unconditionally admitted, conditionally admitted, or unfortunately rejected. Sometimes, most students are recommended to do a Pre-master especially for students who are originally not coming from IR discipline.
In fact, the number of selected candidates for Stuned Scholarship has also decreased compared to those who were accepted last year. As our Scholarship coordinator has said, this would be more competitive year by year. The Dutch Government has believed Indonesian students to study there so there is no doubt that the Nuffic Neso and the Dutch Embassy would be very selective. I was also so nervous at that time, waiting so long under uncertainty.
After those long application scholarship processes, I barely know that every scholarship has its own character. Not only preparing your application and the battle of the selection process, but you also need to have an in-depth understanding in terms of your objectives and characters, and the scholarship’s objectives and characters. Unintentionally, both will create such a great configuration once you have been accepted. They choose you because you are suitable with their aims and vice versa. In the meantime, once you are failed, no need to think that you are not smart enough, but please thinking that there are many great things left behind which have been prepared for and suit you the best. “Success is not always about how great your achievement is, but sometimes success is about how you deal with your failure.”
Last but not least, another case is that sometimes we also have to deal with the condition of whether or not the scholarship is more important than the major or specification we are keen on. As its consequence, we often experience the shifting of academic and financial motivation in which we, unfortunately, need to change our most preferably major in a purpose to be more easily getting the scholarship. This circumstance might occur for applicants who want to apply for Stuned or other scholarships. Nevertheless, don’t let that condition happens to you. Because if I could say some words, choosing a master’s degree is not an option, but somehow, it must be a priority. You need to focus on your passion and what you really want to struggle for in the upcoming academic year once you have already been accepted. In fact, there are many things out there you need to deal with during your master’s life. The Honeymoon Phase would actually end immediately.
To close these elaborative procedural instructions regarding Stuned Scholarship and my personal experience as well as the lesson learned I have obtained, I just want to shout out: “Good luck and I am wishing you all the best for your scholarship application process! Allah will definitely guide you to the right decision and Allah will absolutely choose the right destiny for you as well. In between of your struggles, always reminds Allah 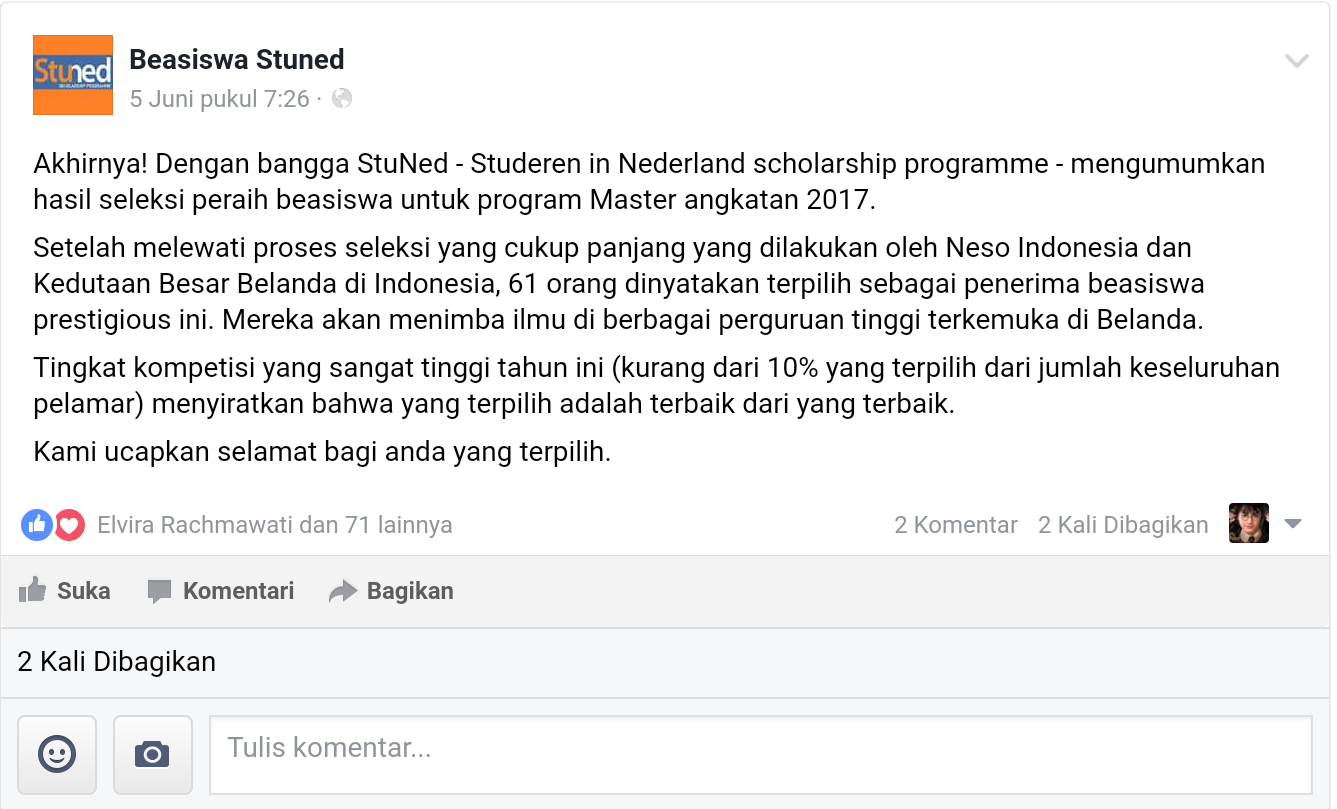 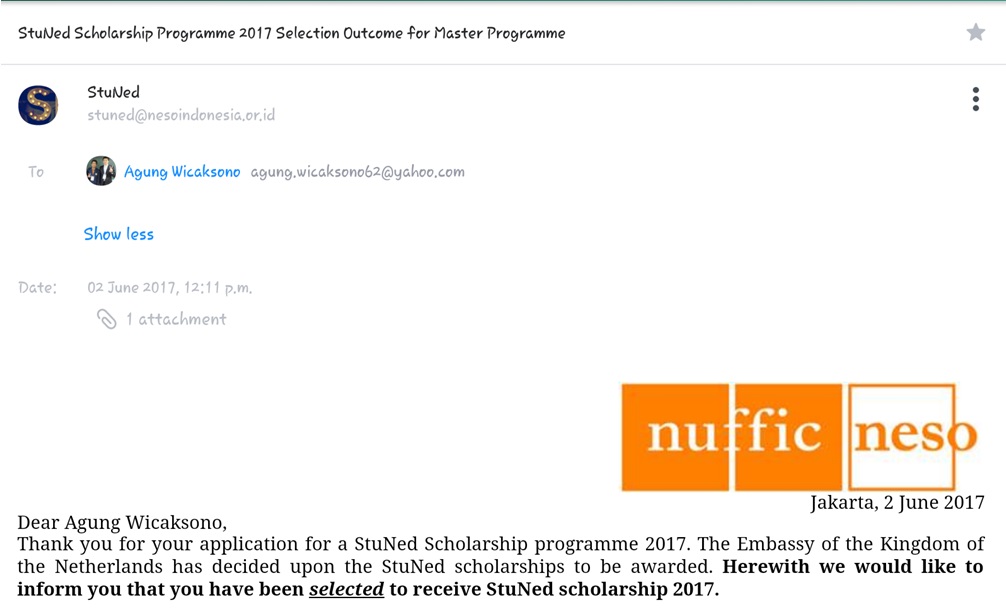